This is the last piece of the “REAL Core Training” article series and here we will discuss the progressions from your basic core training, to some of the most advanced core training exercises.

If you haven’t read PART I or PART II I suggest you do that first (just click the links) as those provide the foundational principles and exercises that must be mastered first before incorporating advanced core exercises into you training program…well at least if you don’t want to risk a disc herniation, vertebral fracture or a low back that is tighter than a fat man in a woman’s tennis uniform! 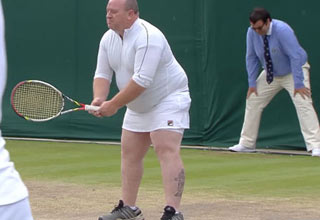 Ya, that actually happened this year at Wimbledon!

So once you have mastered the basics, and have built a solid foundation that will not crumble under new and more intense movements, it is time to take your core training game up a notch. Like any other body part and movement, you must increase the demand or stimulus over time to continue progress.

What follows are a few ways to progress the standard core exercises (plank, anti-rotation press, side plank) with a few examples.

1. Remove a Point of Stability

With the standard plank you have four solid points of contact with the ground. Those points are your two arms (or forearms) and your two feet. By removing one of the points of contact you reduce the stability the system as a whole, and challenge your core now to control more than one plane of movement.

The goal now is to prevent the hips from shifting or rotating side to side, while you continue to prevent them from sagging to the ground (low back from arching).

The db plank row is one of my favorite exercises as it attacks anti-extension and anti-rotation components. ➡️ The goal is to keep the hips from dropping or rotating as you alternate rowing the dumbbells. You should feel the work taking place in your core, never in your back. 🎯 Go for 2-3 sets of 8-10 reps per side to finish out a solid session. #core #coreworkout #corestrength #abs #absworkout #strength #strengthtraining #strengthandconditioning #athlete #athletic #athletes #theathleticway

With the standard plank the arms/forearms are right beneath the shoulders at a 90 degree angle. Now if you take your arms and move them out overhead, the length of the lever you need to control (the length of your body) becomes longer making it much more challenging to prevent the hips from sagging, tipping forward and the low back from arching.

The goal is to maintain the “zipper up” or “tail tuck” position throughout the entire exercise. If you start to feel pressure in the lower back you have likely slipped into anterior tilt at the hips and over extension at the lower back. Stop short of this, and work to get stronger and move further into the outreached position.

With the anti-rotation press adding different directions of pull with the cable requires you now to control both extension and flexion, as well as rotation.

Anti-Rotation Press Up Down

The anti-rotation press up down is a progression of the standard anti-rotation press that enhances the benefits of the exercise. Those being 1️⃣ While pressing the arms away from the body creates a longer lever which is what challenges the core to prevent rotation, bringing the handle up to the forehead and down to the belt line increases the lever length from your center of gravity, therefore making it more difficult. 2️⃣ The up and down motion targets the stabilizers of the shoulders to a greater degree, making it a bigger bang for your training buck. ➡️ These make for a stronger, more injury resilient core that will help decrease the chance of back pain and hip pain as well as enhance overall performance. 🎯 To properly execute the exercise make sure that the abs stay engaged by focusing on pulling your zipper up towards your rib cage to prevent extension of the lower back, especially when the hands go up. Also focus on keeping the path of the handle inline with your zipper, belly button and nose. ➡️ Go for 2-3 sets of 6-8 reps per side and make your core stronger and rock hard! #core #coretraining #corestrength #coreworkout #abs #absworkout #absofsteel #shoulders #shoulder #shoulderworkout #strength #strengthtraining #strengthandconditioning #fitness #fitnessmotivation #fitnesscoach #theathleticway #athlete #athletes

Or you can make the lever action quick and short bursts across the body which forces you to prevent the hips and torso from rotating when there are rapid changes in external forces.

With the side plank, adding external horizontal forces such as upper body pushing and upper body pulling creates a rotational force on the body while you are still working to prevent the hips from sagging towards the floor (anti-lateral flexion).

1-2 days per week I like to get a little power conditioning in. ➡️ Today was 7 sets of 150 yard sprints working with 30 yard intervals. ➡️ I followed that up with 3 rounds of a medball circuit as shown. 🎯 I usually stick to a 1:2 work to rest ratio (resting twice as long as it takes to complete the sprint / circuit) as the goal is to keep the power output high and condition yourself to reproducing quick explosive actions repeatedly. 🎯 This is also a great way to enhance fat loss while minimizing muscle loss! #power #conditioning #core #fatloss #fatburn #athlete #athletic #athletes #coreworkout #circuittraining #theathleticway #fit

Today was an intensive lower body training day, meaning a lower volume and focus on power, strength and explosive conditioning. ➡️ This was the 3rd of 10 reps of 40 yard sprints with walk backs. This gave me roughly a 6:1 rest to work ratio which was plenty of rest to allow me to keep my speed up for all 10 sets. ➡️ Keeping the conditioning on these days short and explosive with plenty of rest is key to maximize strength and power adaptations and overall results! #sprint #sprints #theathleticway #conditioning #cardio #cardioworkout #strength #power #explosive #athlete #athletes #speed #strengthtraining #strengthandconditioning #strengthcoach #fit #fitness #smarttraining #getafterit #fatloss

While the title of this article is a little misleading, as there is never a “final” step in your core training, the above progressions are the more advanced progressions when it comes to training your core.

These progressions all create a greater challenge and therefore enhance the strength, stability and overall performance of the core when executed properly. They also create a 360 degree demand, therefore resulting in greater definition and aesthetic appeal.

The principles discussed above along with the previous 2 articles will allow you to train your core for optimal results when it comes to injury prevention, performance enhancement and aesthetics.

No more are the days of blowing your spine to smithereens in the hunt for a higher performing and better looking midsection!

If you want even more in depth information and to go through some exercises in person check out the info below for the upcoming REAL Core Training Seminar…only a few days away!