The 3rd, and final piece to this series.

With part 1 and part 2 already in your knowledge bank (and if they aren’t, read them now), after you soak up the knowledge in part 3 you will have a solid foundation from which you can perform a majority of the exercises you will encounter within a training program, and know how to do them RIGHT!

Once again, it is all about the proper execution of exercises, and where you are feeling them work that is the most important factor to truly enhancing performance, mitigating injury and reaching your overall goals whether that is athletic performance, muscle gain, fat loss, etc.

With that, lets cover the last 3 movements of this series…

The lateral lunge is a key movement to maximize lower body function, strength and size as it challenges the musculature in a way that we typically don’t with other common exercises.

The majority of exercises performed for the lower body (think squats, deadlifts, forward/reverse lunges, step ups, etc.) are taking place predominately in the sagittal plane. This means that most of the exercises performed involve the body going up and down in a backwards and forwards pattern.

But the body doesn’t just work in a couple different planes, but rather we move in all 360 degrees. So in order to maximize results and limit injuries, we must train in all planes. The lateral lunge targets the frontal plane, or the side to side plane. 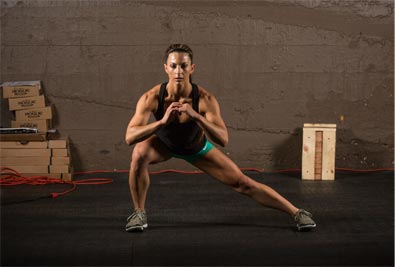 While you will feel the lateral lunge working the quads and achieving a stretch in the trailing leg, these should not be the predominant areas being worked. And just like almost every exercise, you should NOT feel the low back performing a large amount work.

Why this happens is that first and foremost we are not controlling our hips from dumping into anterior tilt. So you need to focus on using your abs to “pull your zipper up towards your ribcage.” This again helps to prevent the hips from tipping forward and creating overextension in the low back.

Next, many times we end up staying too tall through the torso and not achieving the proper hinge we need at the hips. This forces us to glide forward at the knee which promotes excessive quad activity and forces through the knees.

↑ Too straight up and down, not enough hinge backwards.

Instead, try focusing on keeping 80% of your weight in the heel of the moving leg as you push your butt backwards and pitch your chest forward slightly. The back should remain neutral (flat) throughout the movement, but again you should pitch forward slightly in order to achieve a greater hip hinge. This will help you activate and feel the work taking place in the glute of the working leg…where we want to be working!

And when it comes to feeling a massive stretch in the trailing leg, we often leave too much weight in that foot which forces us to utilize that leg more. To fix this, focus on keeping as much weight as possible (again around 80%) in the heel of the moving leg once you contact the ground.

With these cues taken into consideration, you should feel the majority of work taking place in the core, glute of the working leg and upper back.

The chin up, and all other vertical pulling exercises, are key movements when it comes to enhancing overall performance, strength and fitness.

When asked, many of us feel this exercise working the biceps and lats, which is a good thing, but we also feel our lower back, neck and the front of the shoulder.

The lower back experiences pressure because when we go to pull, we do not control the forward tip of the hips. This places excessive pressure on the low back. So here, as with the previous exercises in this series, you must focus on keeping the core engaged to prevent the hips from tipping forward throughout the entire movement. You can also try bringing the legs to the front of the body which helps to keep the hips from tipping forward. Second, as we approach the top of the chin up we typically end up finishing by reaching the with the chin. This places forces through the neck that can result in unwanted injuries. 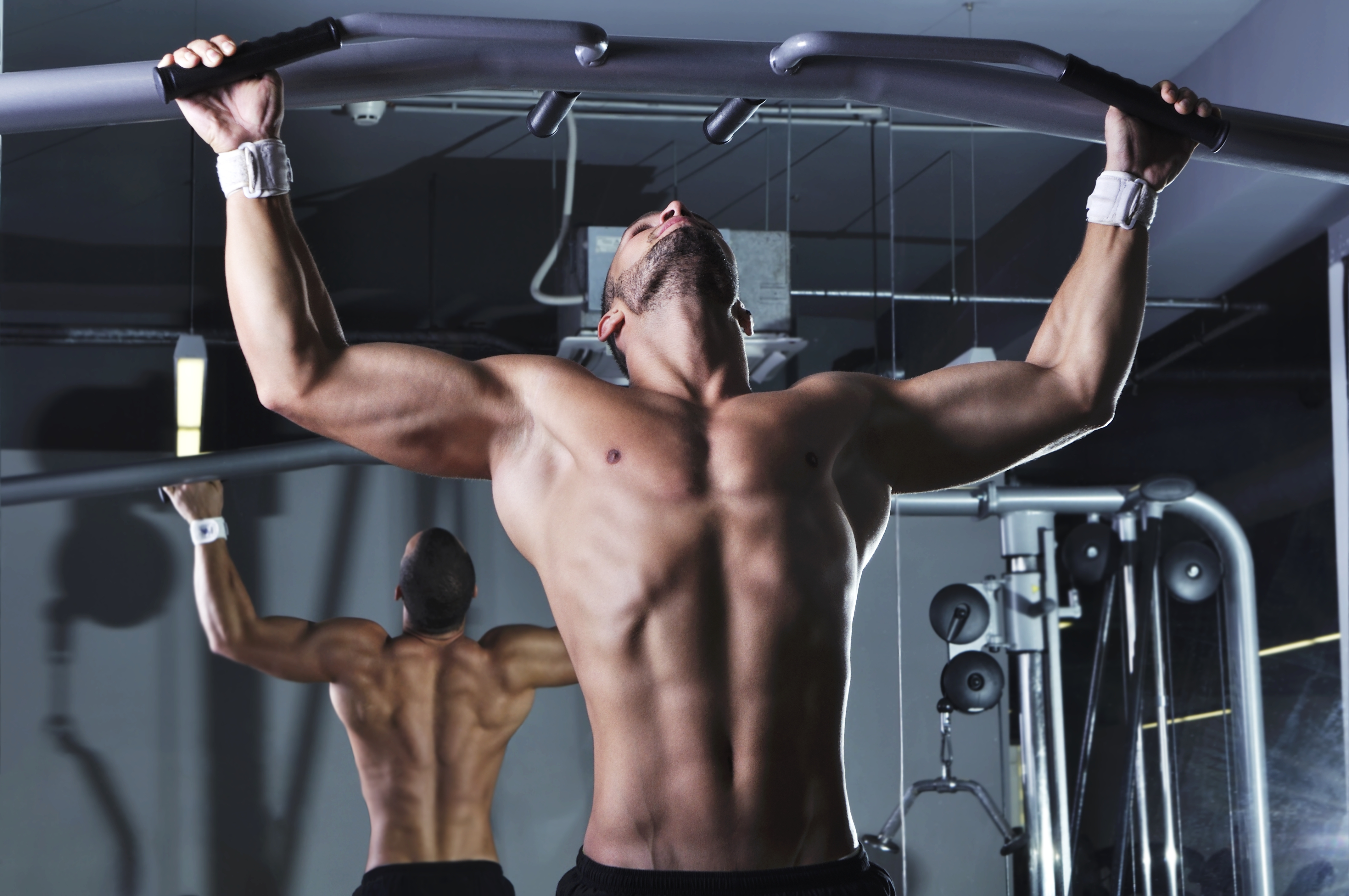 So here make sure to “tuck” the chin, or in other words, try to make a “double chin” keeping the eyes straight ahead.

Lastly, when you approach the top of the chin up, focus on keeping the shoulder blades tipped backwards, not forward!

With that you should feel the chin up working the core, lats, upper back and biceps. If you feel anything else you need to reevaluate the execution of the chin up.

The overhead press is an exercise that many of us have been told is not a “bad exercise” because it is “not good” for the shoulders.

Or on the other hand, we have been told that it is an absolute monster when it comes to building upper body strength and size, and therefore we push through pain in order to complete it.

First, you should never push through pain, but you should also question anyone who says that any one exercise is inherently a bad exercise…unless you are back squatting on a stability ball! 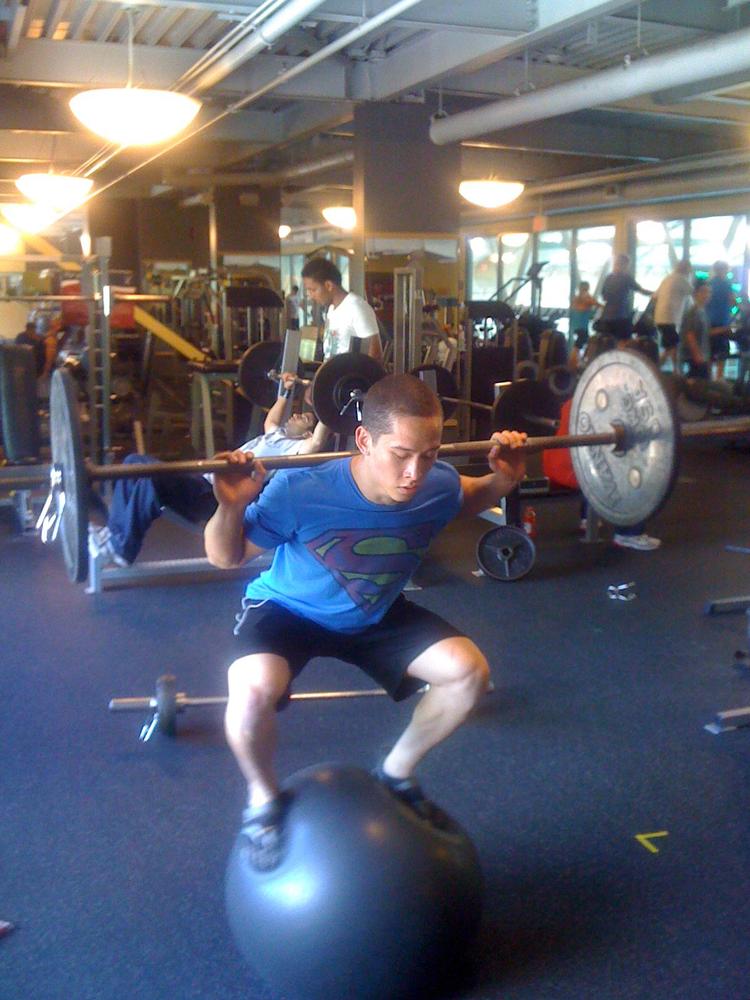 As you now know, exercises become “bad exercises” when they are executed improperly, and the overhead press is no different.

With the overhead press (and its many variations) we oftentimes feel the work taking place in the shoulders and triceps, which is good, but we also feel the lower back, and a “pinching” feeling in the shoulder.

You can probably guess what is happening with the lower back!

As we push overhead we have a tendency to lean backwards, push the hips forward and allow them to tip forward. As we now know, this is bad news for the lower back.

↑ Dude is jacked, just like his back will likely be!

This is where you will get a pinching feeling which overtime can result in chronic injuries such as  a labral tear or rotator cuff damage.

So again here think about your shoulder blades moving up and around as the arms press overhead. 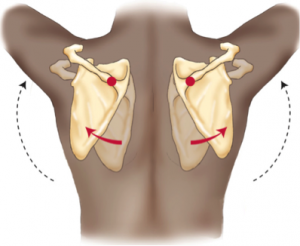 With these two big considerations in mind you should feel the work taking place in the core, shoulders and triceps without any pressure or pain in the back or shoulder.

Over the past 3 articles there was a lot of information about where you should, and shouldn’t be feeling the work taking place during 9 different movements.

Once you know and understand these you can train more optimally, achieve maximal results and prevent becoming one of the many who have fallen victim to the overuse injury plague wreaking havoc on the athletic and fitness population.

Use your newfound knowledge to help others and do them a favor and share this series with them.

Remember it is all about the execution of exercises that really determines the outcome of your training…so execute properly!